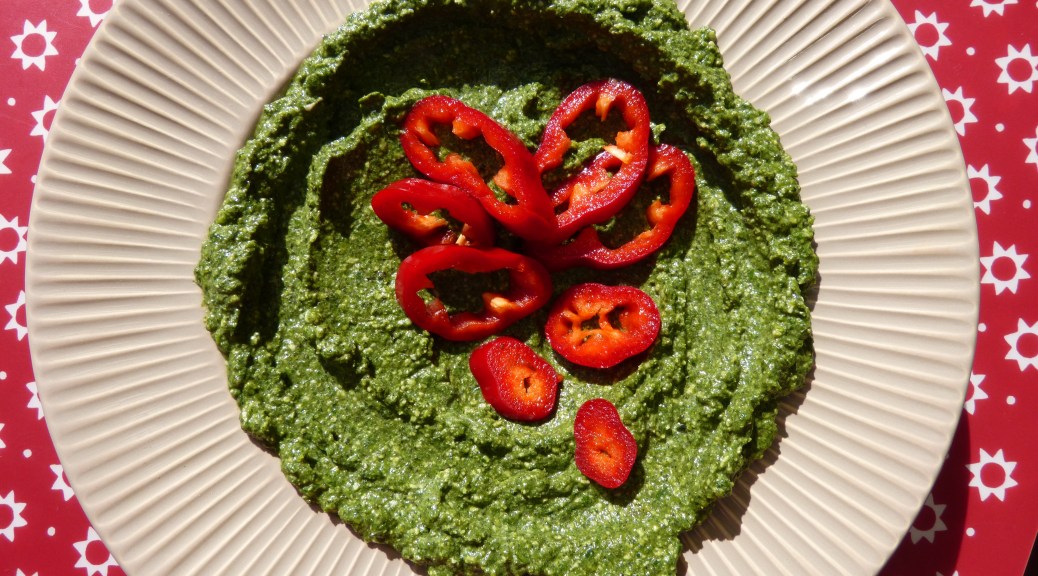 Spring is all about the wild, young greens so vibrant and tempting after the long, barren winter. Besides salads, where delicate leaves such as ramson, celandine or dandelion are best consumed fresh and raw, there’s a variety of traditional dishes where one can enjoy the more rough ones such as nettles or docks in cooked versions.

This recipe here came about unexpected, as I have been making a lot of the traditional nettle dish this spring. One day friends were announced for lunch and so that morning I put a handful of cashews to soak. After a few hours, between preparing other dishes, I blanched the nettles (without even removing the stems), thrown them in the food processor over the cashews and added olive oil, quite some lemon juice and, at the end, two small bundles of lovage – what was to give the very special flavour to this dish. I guess some fresh ground pepper could also work in there.

The pesto turned out so rich and yet so fresh, that I decided it needed a patent :)) We had it next to potatoes and coleslaw and of course some fresh spring leaves. Enjoy it too! 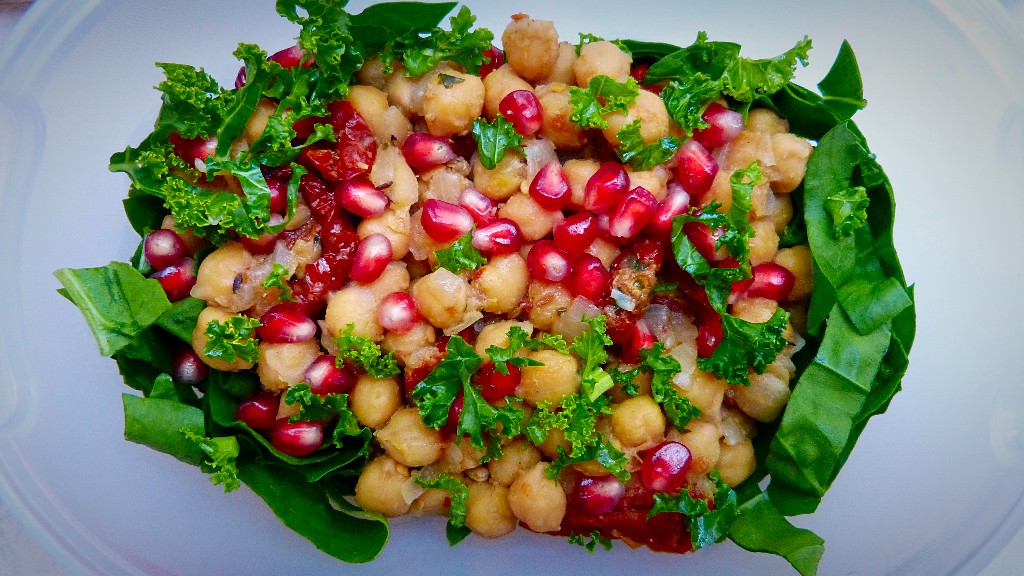 This is the simpler version of the Chana Masala, a rather sophisticated dish that might require some time when all things are done from scratch. So, this one goes to all of you who are new into Indian cooking and still want your leafy veggies in your plate 🙂

You start by cooking the chickpeas over the pressure cooker, adding a piece of whole cinnamon, cumin seeds and salt. Meanwhile, prepare the rest of the yummy stuff: cut the onions finely, make a ginger garlic cream (simply mix it together with an immersion blender and a tad of water), slice half of a chilly and some dried tomatoes (if they’re hard, make sure you hydrate them in advance).

When your chickpeas are ready, put them aside to rest and fry the onions, the garlic-ginger cream and chillies with little oil and salt (use a skillet pan or a wok for that). When their water evaporates, add some chickpeas stock, sprinkle ground cumin and cinnamon, stir well and leave them to cook for a bit. Then add the chickpeas (a bit more stock is fine as well) and stir over the fire for another 5 to 10 minutes. You can use a fork or a special utensil to crush some of the beans.

Now the last details: take out the seeds of a pomegranate and prepare the fresh leaves you want to use – it can be spinach, kale, coriander, etc. When the chickpeas are not so hot anymore, mix everything together and, if you feel like, add some olive oil & lemon and sesame seeds. 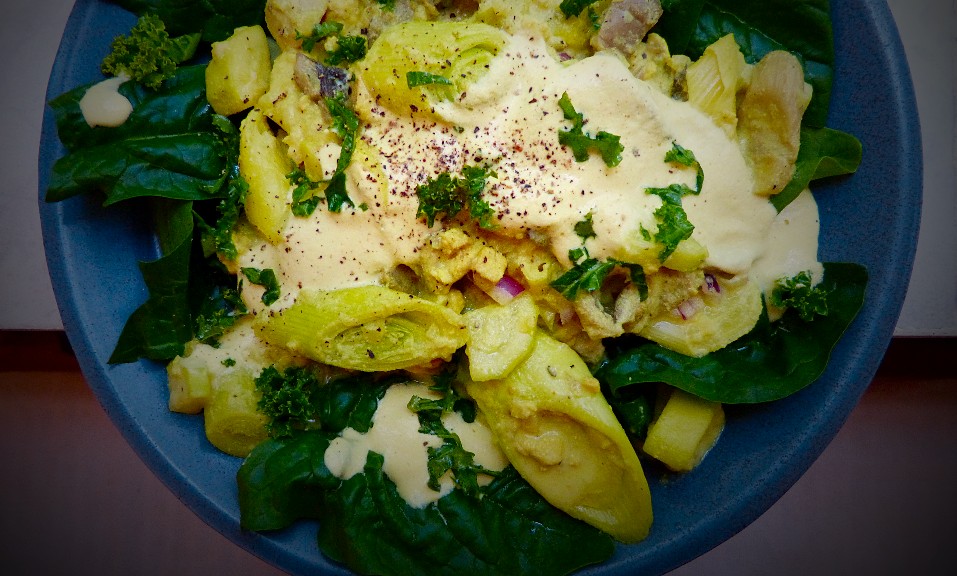 Best recipes never come alone. They come with friends, with ‘no-plans’ evenings and intuition boosts. This one started from Li’s proposal to make some vegan tripe soup, a supposedly superdelicious substitute dish for the original one. Not that I’d have any idea about the resembling taste… okay let’s do it!

That being said, we haven’t cared much about the recipe and basically wove around what was in the fridge. Back home, after one or two more experiments likewise, I ended up with this beautiful yellowish sauté, where leek slices, celery shreds and squash pieces are mildly spiced and dipped together with pleurotus in a rich cashew cream. Here’s how it goes:

Turn the veggies in the size you wish them to be, having in mind the texture you want to create. Being essentially a stir-fry, it won’t stay more than 15-20min over the fire, so move quickly.

Prepare the cashew cream by mixing soaked cashew nuts with water, lemon and salt in a high power blender.

Prepare the seasoning: crush a few cloves of garlic, cut in very fine pieces some ginger and ground some pepper. Now fry them in little oil and be sure they won’t stay as long as to be making a crust. Scramble in your favorite kind of tofu cut in small pieces (I used smoked tofu) and sprinkle pepper and turmeric and/or chilly flakes, if you wish.

Immediately after add the mushrooms and cover until they turn watery. Remove the lid and cook 5 minutes more, then add celery, leek and only at the end, squash. Stir gently from time to time to keep texture firm. Pour the cashew cream and serve with kale or spinach leaves and optional, slices of raw red onions. Squeeze more lemon to your taste. Enjoy! 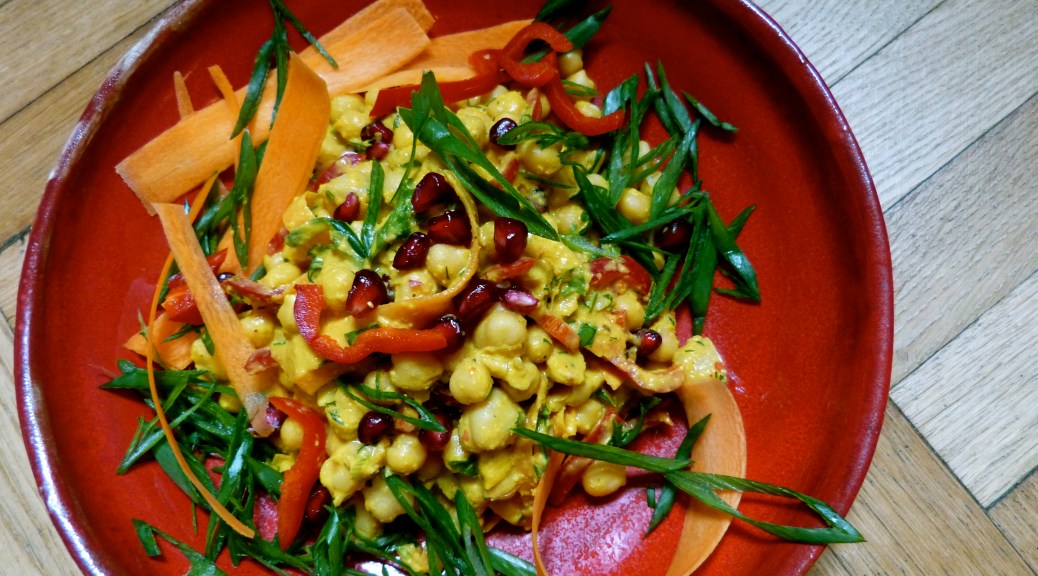 When I use turmeric, I feel that my dishes are not only vibrantly golden, but also nutritiously stronger. No wonder it has more health uses than any other medicinal herb! Over time, I learned to keep it handy and add it to almost any food being cooked over the fire or to sometimes use it for creating the loveliest salad dressings.

Most often, I let myself drawn by imagining how other vivid colors would look like next to the shining yellow and this is exactly how new taste combinations and dishes turn into reality. 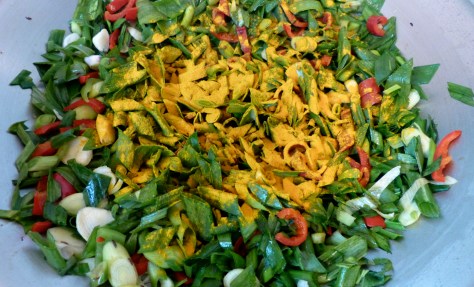 One of the dressings I love the most is inspired by this one, and I particularly like the texture given by the carrots inside, not to mention how well it balances the bitterness of the turmeric. What I use is:

See that mustard is in itself pretty sour, so if you choose it, you won’t need to add vinegar or too much lemon. Similarly when using soya sauce be mindful regarding how much salt you add.

I like the combination between this sauce and the sweetness of chickpeas or the glutinosity of rice.

So here you have it next to a beautiful dark rice soaked in coconut milk and accompanied by autumn veggies – carrot, pumpkin, leek and sweet potatoes, them too sauteed with the magic yellow powder. 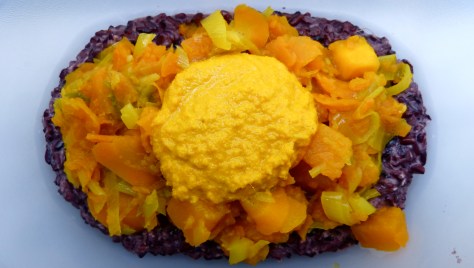 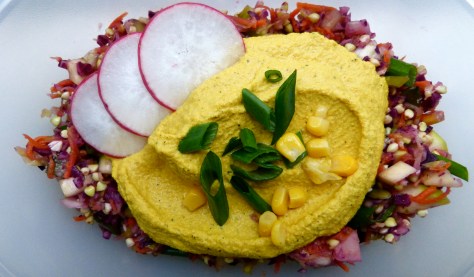 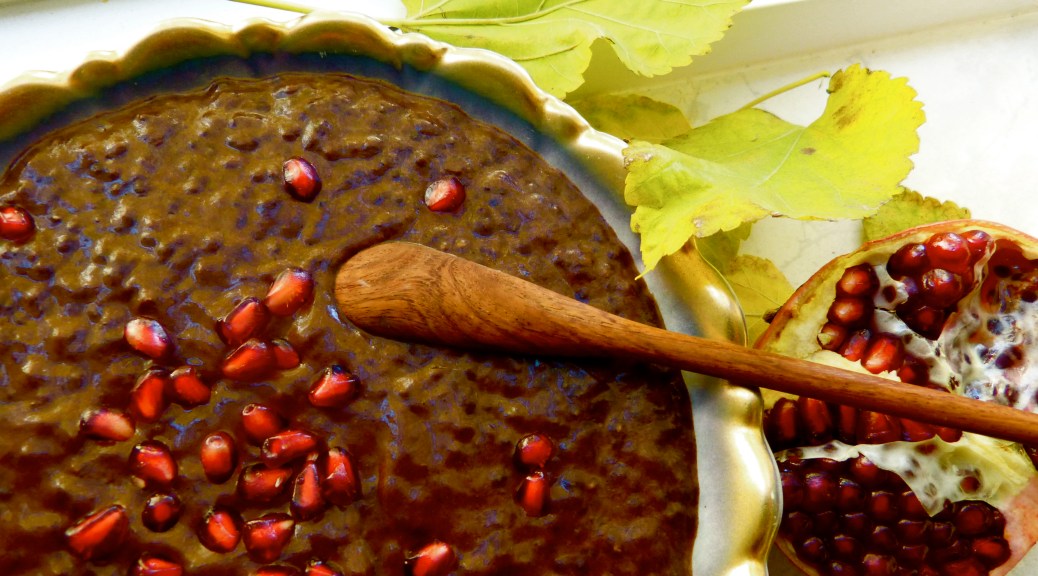 This desert is so simple that it’s going to blow your vision about vegan cooking. Well, rather preparation than cooking 🙂

As you probably know by now, beside being a superfood, chia seeds are easy peasy to be used in the kitchen. When soaked in water, they create a mucilaginous mass in a matter of minutes. You can stir them from time to time and add more water if needed, but for the time being just leave them aside and focus on the avocado chocolate. Its delicious taste is obtained by the sole use of a few ingredients:

Now mix the already set chia pudding with the chocolate and decorate it at your wish! Enjoy this simple raw desert as breakfast or a special treat with friends. 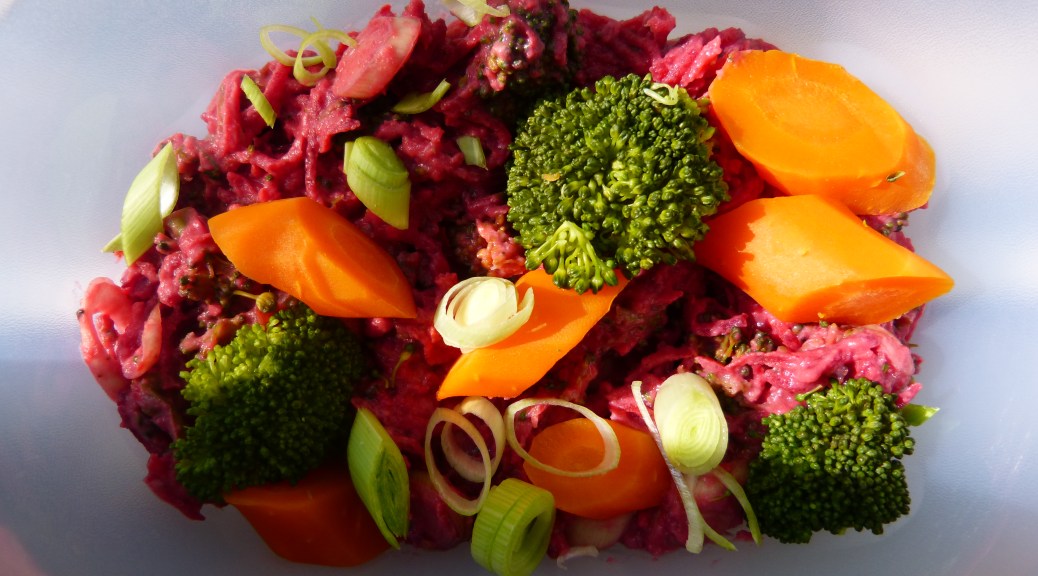 The recipe I’m going to share with you makes it perfect for a local based meal during the cold season. Relying solely on our veggies – those belonging to the temperate climate – shouldn’t make of you a kind of an abstemious person, neither put you in a dilemma each time you want to cook. All you need is to do is put that imagination to work!

So for this particular dish, beside collecting your fav roots, you should decide upon one delicious dressing. Here is what I’m using pretty often, with mustard as a main ingredient, in two versions:

I also added broccoli, but I guess you can use any of his other relatives, such as cabbage or kohlrabi.

So top those steamed veggies with mustard sauce and get some new tastes going! 🙂 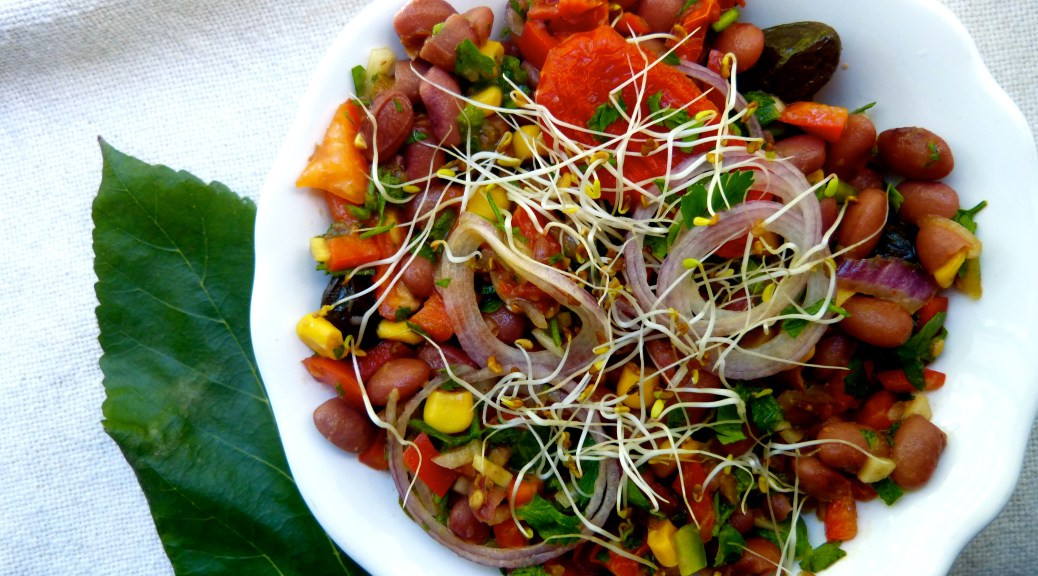 Each time my taste buds come in contact with a new combination of tastes, I’m completely drawn to re-creating and further improvising on the alchemy.  Was the same case with this great salad proudly introduced by my uncle back in summer. Firstly, I made it vegan (it did contain fish) and secondly, I kept introducing ingredients that would suit – color wise and texture wise – the base of the dish made out of kidney beans. Which by means of richness makes it totally a main dish, though by means of the preparation process is as simple as a salad.

All you have to know is to give plenty of time to the boiling of the beans, so you have it tender, mingling nicely with the crisp veggies As always, pressure cooking is the best option. Also, pay attention to the juiciness of the composition as some of the ingredients – the beans and the dried tomatoes – may progressively suck in the dressing. A good moment to practice indulgence :)) 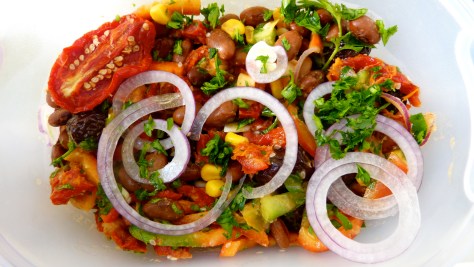 Below you have the list of ingredients, but feel free to make your own choices! 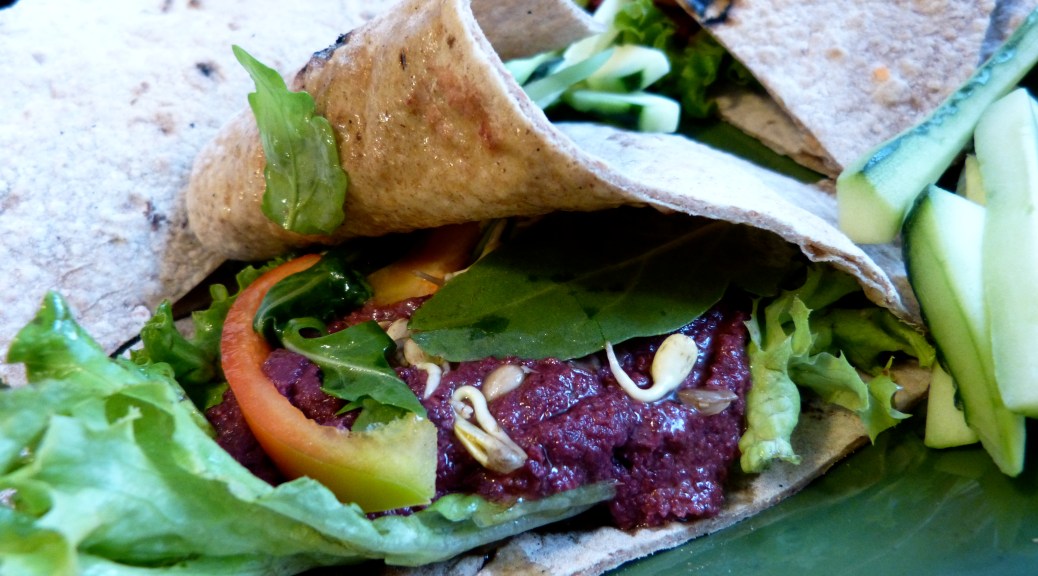 This recipe was put together in one of those days when the excitement that I had for trying out a new kind of hummus led to an unexpected number of lunch orders. Yeey!

So when I started, all that I had in mind was: hummus + beets + garlic + thyme. Somewhat of a Mediterranean flavor. But as the process started to take shape, I felt like adding more than that.

One of the main ‘taste’ ingredients turned out to be the smoked paprika powder that I love so much. It almost slipped in by itself as if called by the vivid color of the beetroot 🙂

And then, the main ‘texture’ ingredient, the one that actually holds the whole thing together is the linseeds.  Always use it freshly ground and don’t add to much, or you’ll get a slightly unpleasant taste in your food. And on top of that, way too slimy! Unless it’s consumed right away, I actually dislike it in salad.

You can also add onions and parsley, but if you’re going to refrigerate the hummus, better keep it only for serving. 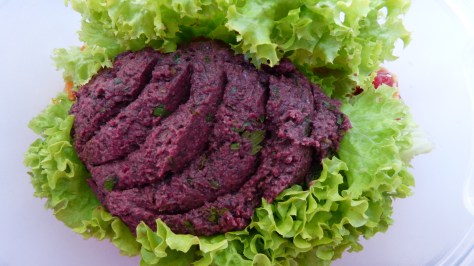 And, as the title points it out, the ‘smoked hummus’ can turn into the perfect filling for those vegan burgers that you wanna prepare when your friends are coming over! Use your imagination to simply add beside nicely sliced veggies and herbs. I even used my dear chapati pan to get the real taste of the flat bread 🙂

Hope that’s something to have fun with over the weekend! 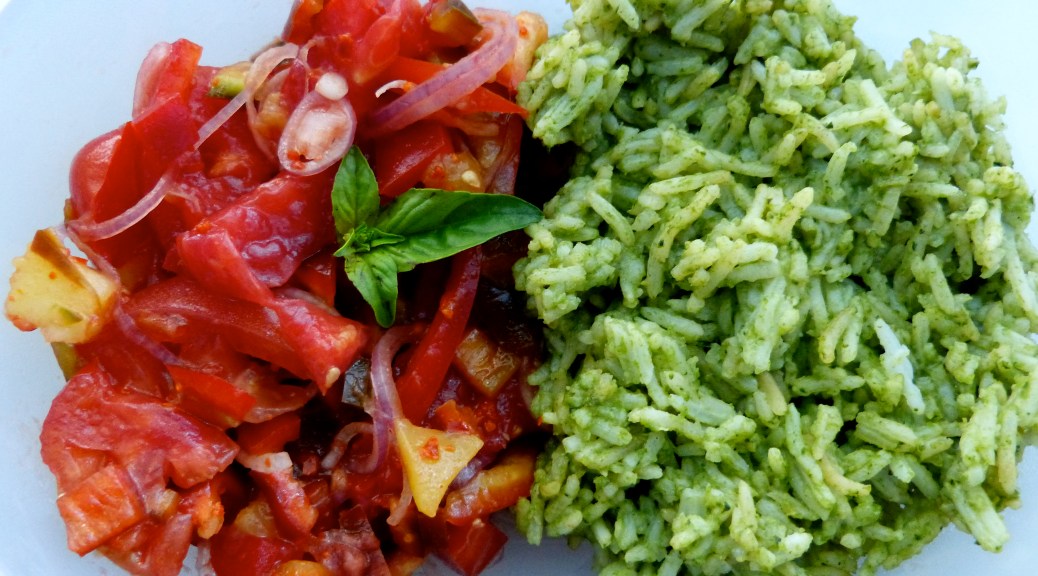 Though autumn is here, I bet you can still find at the market one of those pulpy juicy tomatoes that delighted your taste buds all summer long. That’s plain easy, so don’t get frustrated if you won’t have the perfect ripe mangoes (always consider the Mediterranean for that!) You can of course try the canned ones, but pay attention they’re not totally soaked in sugar syrup.

So that’s basically the recipe for one of the best salads that you can have in a snap. Finely slice some red onions and red capsicums and add chilly flakes and olive oil to your own taste. I served it next to my favorite kind of rice, the very special Basil Rice <3 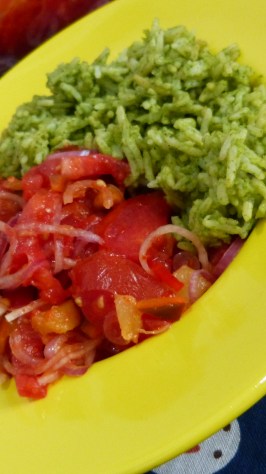 Now you can bask in autumn’s sun! Take it as a promise: you will relish this cake! It’s not only mouth watering, but also fresh and tingly. Kinda everything you need for a hot summer day. Nevertheless, is fairly easy to prepare.

You can opt whether you’ll make it in one layer or two. 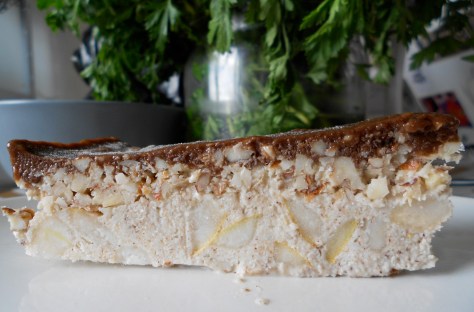 Some time ago I use to put it under a chocolate layer, but now I prefer the simplicity of the cashew nuts. After soaking them, just add coconut oil, honey, fresh ginger & lemon juice to your taste. Use the immersion blender to mix everything together well.

It was a real test to keep the amazingly full-ripe (but not mushed) peaches un-devoured on the table for 3 full days. But it totally worth it! Chopped in tiny squares and rolled through a mix powder of ground cinnamon and ginger, they turned out just perfect for this desert. All you have left to do now is sink the peaches (consider not pouring all the liquid) into the cashew cream, make it even and sprinkle pistachio nuts on top (or almond flakes). Keep it overnight in the freezer and 10minutes after it’s out you can serve it! Garnish with fresh slices of peaches – if you have any 🙂